VOCA is an evolving idea that began in 2008 among a handful of artists who saw a need for affordable spaces for art exhibitions, small performances, readings, lectures and arts seminars. VOCA was an independent effort launched by artists K.C. Madsen, Anne John, and designer Cam Suttles. The wonderful space on Harney Street made possible through the generosity of Anne John was a welcome, flexible venue for the arts for just one year, 2013-14, until the building was sold. VOCA awaits its next incarnation. 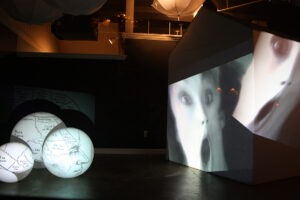 VOCA began without a physical space but still found creative ways of bringing art to the viewing public­—art that isn’t typically seen in galleries.

Windows into Art was an exhibition of contemporary art installed in vacant windows and storefronts in downtown Vancouver, Washington, from June 4 through July 5, 2010. It was an alternative means of viewing art—in an urban setting on public sidewalks—where anyone can discover art and come to it on their own terms. Windows into Art turned the street into a museum and connected people with art.

Co-curators K.C. Madsen and Dene Grigar selected artists for diverse use of media and differing artistic sensibilities. Artists had the option to provide existing works or create site-specific installations. The result was a diverse array of artworks and experiences for sidewalk viewers.

With the generous support of downtown Vancouver building owners and property managers, Windows into Art took place in seven different buildings with a total of 18 window exhibition sites.

The idea of showing art in vacant windows wasn’t new, but what was exciting about this exhibition was the kind of art represented and the number of storefronts in the downtown urban core who were willing to participate in making this exhibition a unique and amazing event. 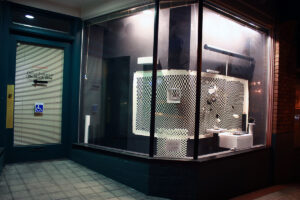 One of the participants in the Windows into Art exhibition was the Vancouver tourism office which included blank storefront windows with nothing more than pulled-down venetian blinds. When the staff realized the value of having art in the windows, they asked K.C. Madsen to curate rotating exhibits even after the Windows into Art event had ended.

Taking a blank wall and adding art to the streetscape on a block that has had little of visual interest has helped keep the area lively. This is a subtle way that people can discover art and an example of how art can be in every part of our lives and respond to shifts in the landscape. When you have a blank wall, fewer people want to walk on the sidewalk. A central part of our urban experience used to be “window shopping” and art can help restore some of that feeling. 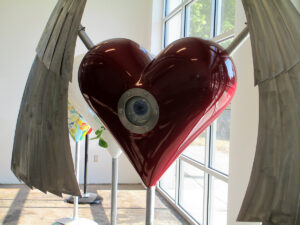 In November of 2012, PeaceHealth Hospital Foundation contacted Anne John, and subsequently AoCC to work on their 2013 fundraiser dedicated to building a new heart and vascular surgery facility.  Anne identified artists to apply their art to thirty fiberglass hearts to be sold at auction. VOCA identified a space on Harney Street for artists to create works and for an artists reception and exhibit. From that point forward, the Harney Street building became home for VOCA. 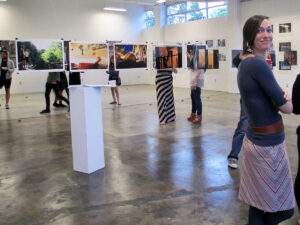 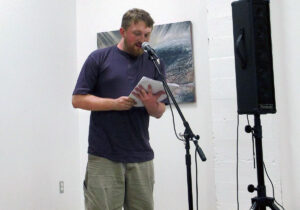 50 artists, participants in Clark County’s first annual Open Studios tour had their preview exhibition at VOCA as part of Vancouver’s November 2013 First Friday Art Walk. Vancouver’s Downtown Association in conjunction with Arts of Clark County and local sponsors arranged for a shuttle bus so that First Friday visitors could experience multiple galleries and establishments in the dowtown area. The VOCA reception attracted more than 700 visitors. 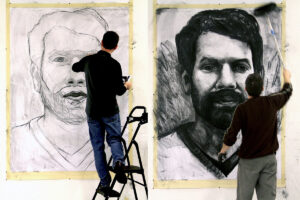 Artist Michael Smith was invited to use the VOCA space to create eight large portraits of Vancouver residents. VOCA allowed him to create pieces on a scale not possible in his home studio, all while sharing his process with the public. Michael also created a stop motion video (hosted on YouTube) documenting his process. 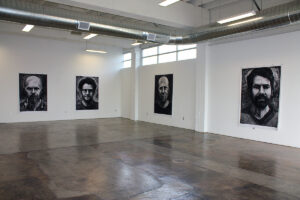 Upon completion of Michael Smith’s month-long “Drawing as Performance Art” event, VOCA held an artist’s reception and exhibition of the finished works. 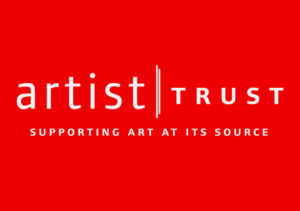 VOCA hosted a presentation by K.C. Madsen, regional representative for Artist Trust, a Washington State organization that supports the interests of artists. She shared a wide array of resources that are available for artists to advance their careers. 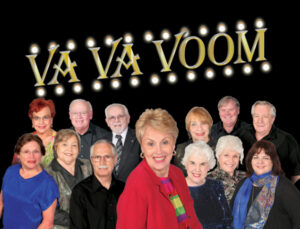 As many small performing arts organizations have had difficulty finding venues in Vancouver, VOCA opened its doors to VA VA VOOM for its winter, holiday-themed performance. 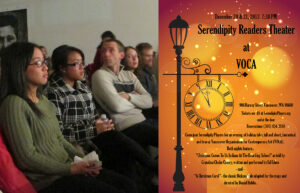 After almost two years and having an enthusiastic following, Serendipity Players lost its downtown space. VOCA stepped in to enable a readers theater with performances held in December and more planned for Februrary in conjunction with Black History Month. 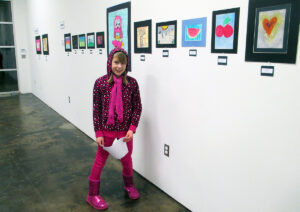 Southwest Washington’s Boys & Girls Club is unique in that it has a rigorous and dedicated art program. Past participants in their Fine Arts program have gone on to win the national 2013 competition. VOCA hosted the 2014 exhibit and the judging of works by these young artists. 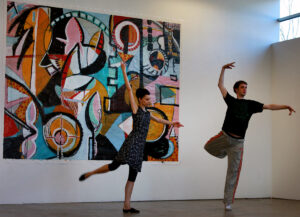 VOCA invited eight artists, all friends, all women, to come together for VOCA’s first Art Lab, a month-long creativity incubator. The idea, initiated by Anne John, is for each artist to take a risk, work outside her normal process or explore a new medium or genre. Working together in a shared space fuels creative energy and inspires us to push our work in new directions. VOCA was open to the public during designated hours so that people could stop in, talk with the artists and see works in progress. An exhibit of completed works was held First Friday, March 7.
Artists included are Michelle Allen, Erin Dengerink, Cynthia Heise, Anne John, Carson Legree, K.C. Madsen, Sharon Svec, and Jennifer Williams. The opening reception also included performances by dance troupe “Off Point” (Patrick Russell, Michelle Wilson Davis, Tracy Carboneau, Erica Castro, and Scott Trumbo). The dancers have various backgrounds from Pacific Northwest Ballet, Los Angeles Ballet, San Francisco Ballet, Eugene Ballet, and Oregon Ballet Theatre. 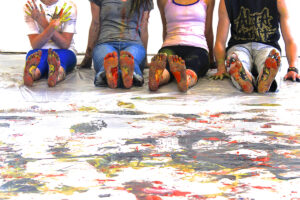 VSAA students take a break during creation of “Exhibit A”

This exhibit consisted of evidence left behind from a prior “performance.” The performance and resulting evidence were generated by Vancouver School of Arts and Academics students from various disciplines along with VSAA art teacher Crystal Zeller and family—all under the direction of artist K.C. Madsen. K.C. “conducted” the performance on Saturday March 29, 2014, with no audience present, only performers and documenters.

Art nourishes our souls, connects our community, and transforms the world.

PLEASE MAKE A DONATION to Artstra. We are a nonprofit 501(c)(3) organization advocating for the arts in Clark County and Southwest Washington. Our all-volunteer organization works toward building greater arts awareness, rewarding creative excellence, and expanding arts accessibility.

SUBSCRIBE to ARTS brief, the monthly newsletter of Artstra.