In last month’s issue of ARTS brief, we talked about a tremendous opportunity we have in Vancouver to build our arts infrastructure, meeting real needs, fueling our economy and bolstering our community’s identity. The key is connecting the right people and resources to make something happen.

We took a small step in that direction February 8 by attending Arts and Heritage Day in Olympia, Washington. The annual event organized by The Washington State Arts Alliance in coordination with the Washington State Arts Commission (ArtsWA) was billed as a gathering that “brings together arts, humanities and heritage leaders, artists from all disciplines, and cultural professionals from across the state.” The purpose for our presence at the event was to facilitate a dialog with our state legislators about our community’s arts and culture needs.

In past years, our region has been sparsely represented at the event. Arts of Clark County took a very proactive approach this year. We recruited and sent five active members of the arts community to connect with state representatives and senators in a series of scheduled meetings to make the case for current arts legislation and, for us, arts infrastructure investment in Southwest Washington.

We learned that a really great project that meets the needs of our community and reaches out to our region will gain the support of our representatives.

Our goal in Olympia was not to ask for anything. Our goal was to elevate our visibility. We wanted to meet our legislators and let our interests be known. Arriving with no expectations, we were thrilled to find that support and funding for the arts does exist, and we don’t need to go forward believing that our area is the stepsister locked in the basement—and locked out of support from the state.

The Building for the Arts program and Heritage Capital Projects Fund budgets are approved each biennium by the state legislature. The two programs help fund arts infrastructure projects. In the last biennium, Building for the Arts requested $9.9 million and was awarded $7.9 million for 13 capital projects across the state. This biennium (2017-2019), $12 million is requested for 16 projects. In the meantime, Heritage Capital Projects is asking for just under $9 million for 35 projects.

To get our region on the state’s radar for arts infrastructure investment will mean encouraging public/private partnerships capable of developing smart, economically viable project proposals that meet the needs of our community and align with the state’s vision for arts and heritage development.

The city of Federal Way showed us one great example of what can be done. This summer they will open a $33 million Performing Arts and Event Center funded by a variety of sources, including state arts funding. This Federal Way project garnered statewide support because it identified an underserved population in terms of arts and culture, and it smartly combined other community uses with the facility. By way of comparison, Federal Way (like Vancouver in relatively close proximity to a larger city with many cultural amenities) has a population of 95,000 (2015 Census). Vancouver’s population is 162,000 (2010 Census). So why can’t we do something similar?

While in Olympia, our team also had an opportunity to meet with other statewide arts organizations and Washington state arts commissioners to discuss arts needs and how to bring more opportunities to underserved regions of our state.

Arts and Heritage Day proved to be a wonderful and productive opening to a broader conversation and, hopefully, to the further development of our area’s arts infrastructure. The dialogue has begun, and we are very optimistic about the potential for both a visual arts center for classes and exhibits and a community-focused performing arts center in Vancouver’s future. 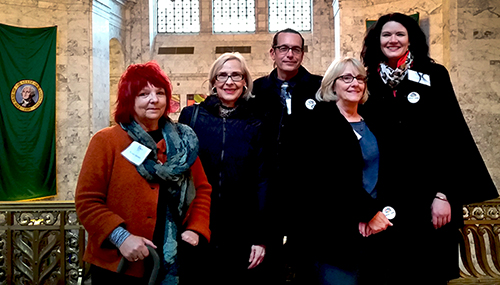