The weekend of November 2-3, 50 local artists will open their doors to the public as part of a free, self-guided tour of artists’ studios in Clark County. Artists will share how, why, and where their art is created. The tour provides a rare opportunity for the public to visit artists and artisans in their studios, view diverse works, and purchase pieces specifically created or made available for the event.

Each year, in addition to artists who have participated in the tour in past years, there are always a number of new artists who apply to the juried event and become part of the tour for the first time. So new and veteran tour-goers can expect to discover new artists and see the latest works from artists they may already know.

“What’s interesting,” says Karen Madsen, chair of Artstra, “is that the new mix of artists always gives us a glimpse into how the local community of artists is changing over time.” 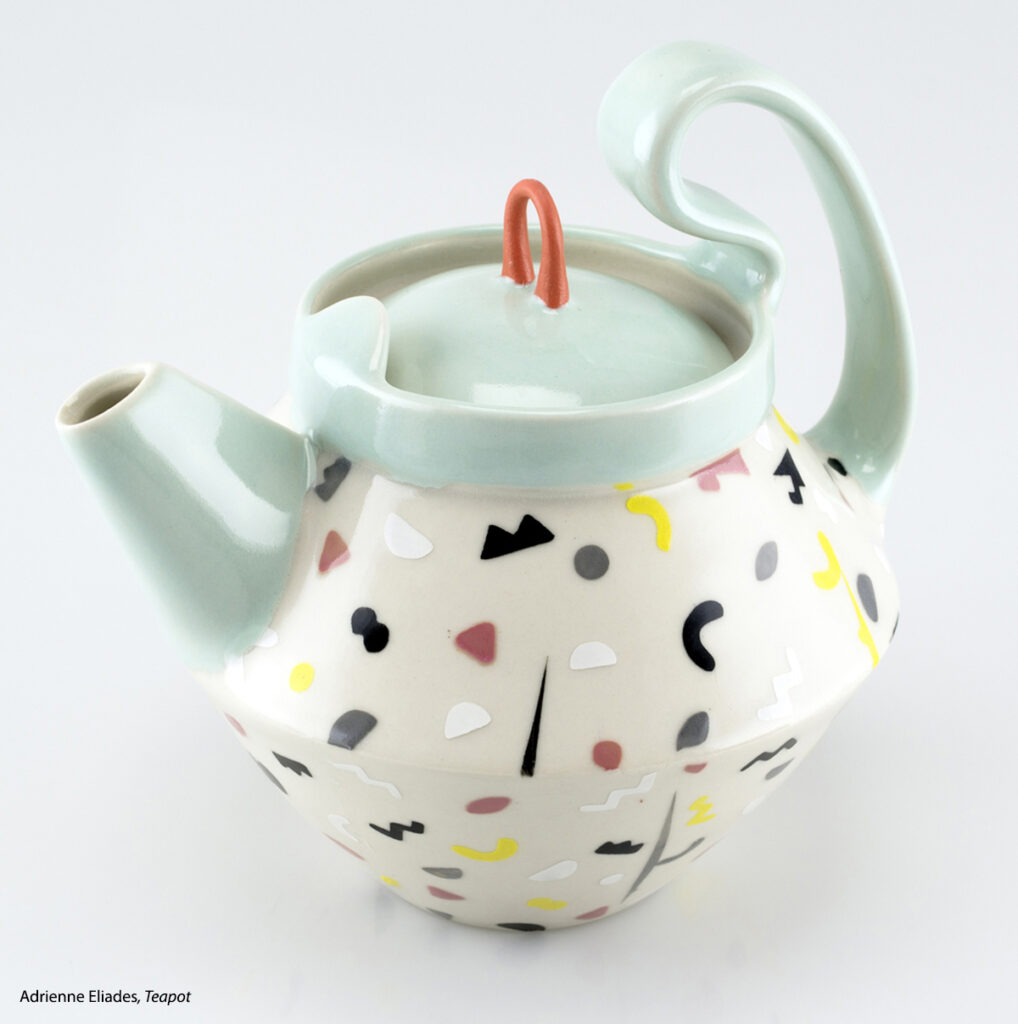 Among the new people arriving and choosing to live in Vancouver and Clark County are artists, artisans, makers, and creatives. Some are former Portland residents and some come from thousands of miles away. They come to enjoy the benefits that others do: neighborhoods, parks, schools, and affordability.

But they also see themselves as a part of the flourishing arts and culture scene of Greater Portland while, at the same time, wanting connections with a local arts community.

“Our open studios program provides that kind of opportunity for local artists to connect with others in their own neighborhood or right down the road from them,” says Madsen.

Two recent arrivals, from across the continent and from across the river have each made Vancouver home and both are first time participants in the Clark County Open Studios Tour.

Adrienne Eliades, originally from Northern Virginia and a granddaughter of Greek immigrants, took a circuitous route to Vancouver. From Wilmington to San Diego to Gainesville to Vancouver — pursuing her education and her art — Eliades’ arrival here in 2016 was somewhat random, she explains. But now she’s putting down roots with her home and renovated garage-turned-studio space in the Carter Park neighborhood next to downtown Vancouver.

Eliades is a ceramic artist and teacher with a deep connection to pottery that not only embraces craft and artistry but also the emotional meaning of the art form as it relates to the human experience of eating and sharing food and drink. Her work balances utilitarian function with the decorative motifs of her original patterns and modernist sense of design.

“From tableware to food specific presentation vessels,” says Eliades in her artist statement, “my work promotes the power of simple rituals that elevate the ordinary to the ornate.”

“The surfaces are inspired by recurring motifs I observe in my environment,” says Eliades. “Patterns are all around us — wallpaper, concrete screens, manhole covers, and security envelopes provide rich source materials of the marks people make on the world.”

Since arriving in Vancouver, Eliades has been a visiting artist with the Ash Street Project in Portland. She also teaches ceramics at Portland Community College, regularly shows her work, and leads workshops across the country.

“It’s hard to make a living just selling your work when people can buy a two dollar mug at Ikea,” says Eliades. “You have to have multiple income streams to survive as an artist. I think I have four of them right now!”

More and more artists are doing the same. In fact, 20 of the 50 artists on the tour this year are listed in the guidebook as offering workshops or classes.

Eliades says she feels more plugged in to the art scene in Portland than in Vancouver and sees the Open Studios Tour as a way to connect with other artists north of the river. 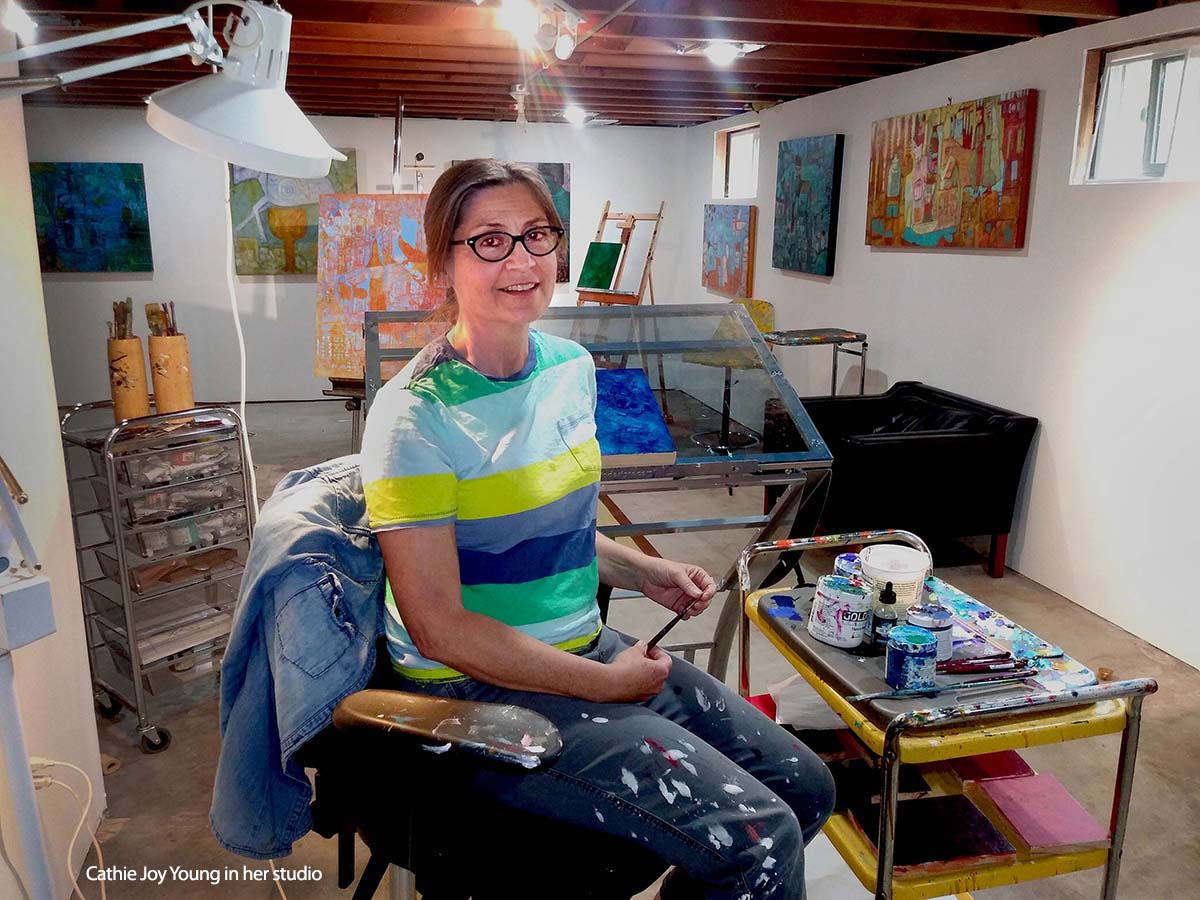 Artist Cathie Joy Young chose to move to Vancouver from Portland just over a year ago.

Young is rooted in painting. Her dad was a painter. It’s just what she does. Her life-changing influence was her experience in the mid 1980s while at Pacific Northwest College of Art when it was attached to the Portland Art Museum. Teachers in those days like Jay Backstrand, Harry Widman, and Bob Hanson made a huge impression on her.

At a moment when Young was struggling on a piece, Hanson bluntly said to her, “Let me show you something” and walked her over to an impressionist landscape in the museum’s collection. “See?” he said, “underpainting!”

“It was a simple thing, but I got it,” says Young. “I was 23 years old and that moment influenced my painting ever since.”

Young’s work expresses a dreamlike blend of the abstract and the figurative. As a seasoned painter, she begins a piece by just starting to paint and by laying down color to “see where it goes.” The results are mysterious and beautiful.

When asked why she moved across the river to Vancouver with her husband Todd and their two dogs Moses and Pearl, Young says, “because it’s peaceful.”

Eliades and Young are just two of 50 artists on this year’s Clark County Open Studios Tour happening the weekend of November 2-3.

For a preview of all 50 artists’ work, the public is invited to attend the reception and preview exhibit from 5 p.m. to 9 p.m. on First Friday, November 1 at Art At The Cave gallery. The exhibit will also be up through the month of November. (Note that regular gallery hours will be extended to 8 p.m. on Fridays and Saturdays through November.) 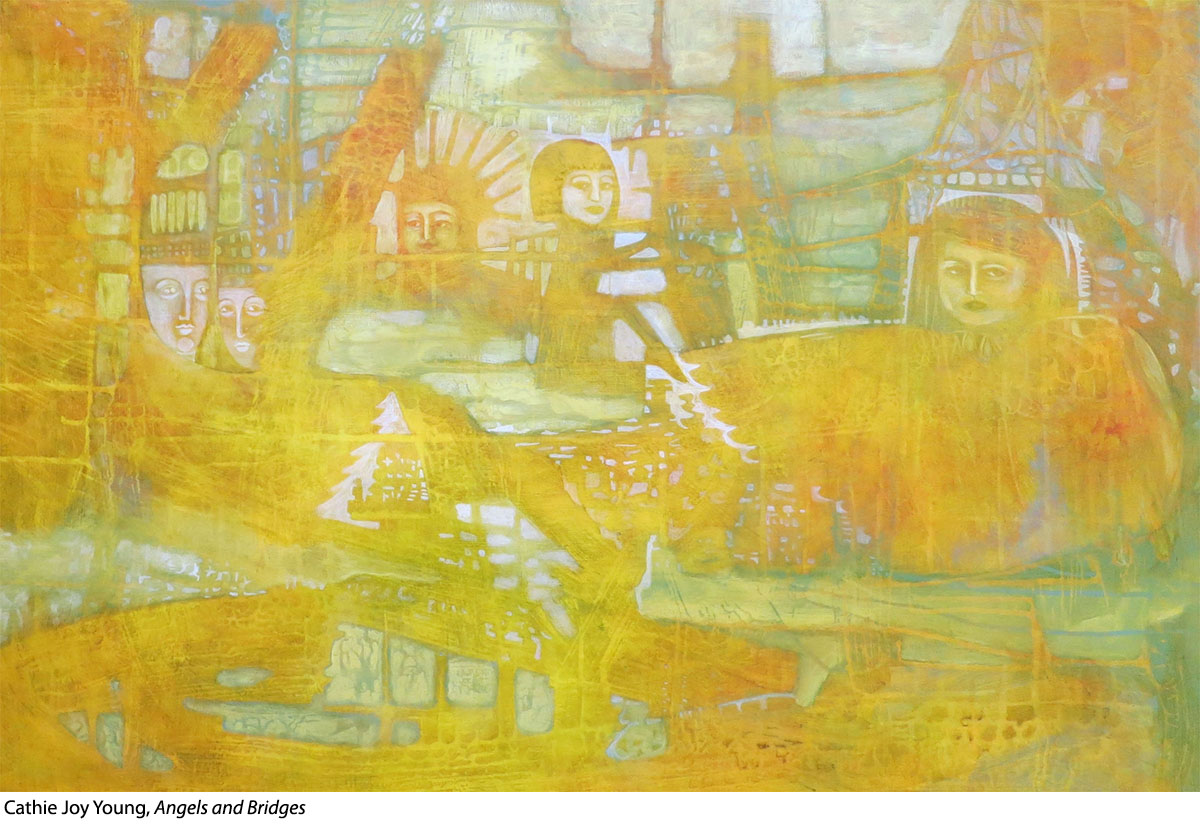