Beginnings
Artstra (formerly Arts of Clark County) was formed in 2010. The group emerged from a two-year monthly forum called Art Conversations that engaged the community in discussions about the state of the arts in Southwest Washington. At that time Vancouver’s Cultural Commission had suspended operations and Clark County had no formal participation in the arts other than its investment in the Clark County Amphitheater (now the Sunlight Supply Amphitheater).

This void in local governmental leadership in the arts left many arts and culture organizations without a formal vetting process or local government sponsorship. Dene Grigar, digital artist and professor at Washington State University Vancouver identified this gap in particular. She personally shared the challenge that local arts projects and programs have in applying for grants in a competitive environment where many grantors favor applicants with local arts commission endorsements.

The core group of artists and arts supporters who met regularly for Art Conversations also saw the value of having a local arts council or commission to generally support the arts in the region. Under the leadership of Laurel Whitehurst, who had previously formed an arts commission in Kent, Washington, the grassroots group chose to approach Clark County with the idea.

Becoming Artstra
Ultimately a formula was reached where the County would form an arts commission with appointed board members but was given no budget, relying on a separately organized nonprofit to act as fiscal sponsor. The Clark County Arts Commission (CCAC) was then chartered as work began on seeking nonprofit status for the separate group, Arts of Clark County, now known as Artstra.

Artstra’s founding members supported CCAC to provide governmental vetting and endorsement of grant applications and to champion the arts throughout the area. Artstra would be the nonprofit advocacy organization to raise funds and create programming and projects since CCAC had no County funding and was restricted from raising or holding funds, applying for grants, or signing contracts. Under a memorandum of understanding with the County, Artstra acted as CCAC’s fiscal sponsor and in return, the County would provide printing services to Artstra.

For several years Artstra offered CCAC their support and partnership on projects and programs. But that support ended in 2018 when CCAC voted to no longer use fiscal sponsorship to fund their programming. As a result of this transition, Artstra needed to publicly communicate and clarify its status as independent from government and so it began the process of rebranding and changing its original name, Arts of Clark County, to Artstra. 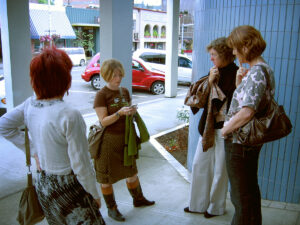 Energizing the art scene
The enthusiasm around the arts in 2010 and earlier spawned not only Artstra, but ideas like VOCA  (Vancouver Organization for Contemporary Art) and Windows Into Art. Meanwhile the influential North Bank Artists Gallery, which hosted many Art Conversations, played an important role along with Angst Gallery and others in strengthening the downtown art scene.

Over the years, Artstra has consistently provided community-wide engagement in advocating for the arts in our region. Its early participation with the Washington State Arts Commission (ArtsWA) in developing the region’s Creative Vitality Index (CVI) reports for 2013–2014 and following up as mentors to Ellensburg and Spokane’s CVI efforts earned recognition for Artstra at the state level in Olympia. Organizing two Arts and Culture Summits in 2012 and 2017, bringing together community leaders and experts in the fields of arts infrastructure and development, set the stage for and influenced the 2018 revision of Vancouver’s Culture, Arts & Heritage Plan.

Programming and advocacy aligned with a vision
By organizing the first open studios tour in Clark County in 2013, Artstra has helped create a unique arts identity in the region. Artstra’s Clark County Open Studios program has proven that there are thriving artists north of the river and, not just local residents, but visitors from the broader region are eager to discover Clark County artists. 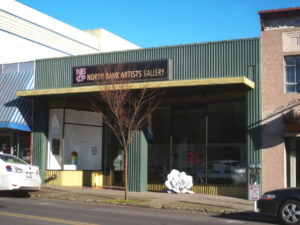 Another program supporting Artstra’s mission is Poetry Moves, developed in partnership with C-Tran in 2015. Launched with the generous support of then Clark County Poet Laureate Christopher Luna and co-founder of Printed Matter Vancouver Toni Lumbrazo Luna, Poetry Moves has been embraced by poets and riders as a unique public art form that is alive (and moving) in the public sphere.

Leading the way
Artstra’s guidance and advocacy contributed to community leaders recognizing the important role arts and culture plays in the economic vitality of the community. There once again is forward motion in creating both a performing arts center and visual arts center. The arts today are less likely to be seen as simply an amenity (accessible for the most part across the river), but an essential economic driver for our region.

Artstra is a 501(c)(3) nonprofit arts organization advocating for the arts in Southwest Washington through programs, projects, and partnerships with community stakeholders. Artstra’s mission is to elevate the arts, build greater arts awareness, reward creative excellence, and expand arts accessibility. Our vision is of a vibrant arts economy in our region where arts and culture are essential with public/private investments and facilities that sustain artists and enrich our community. We are an all volunteer-run organization with a working 10-member board. Our core value is good stewardship of the resources our community so generously provides us.

The development of a thriving arts center north of the Columbia River has been key to Artstra’s vision as an organization. In advocating for arts infrastructure, we encourage visionary leadership committed to learning not only from excellent built examples across the nation, but from history.

2001
Public forum on the future of the arts in Clark County held at WSUV with speakers Barbara Shepherd of JFK Center for the Performing Arts, Kristy Edmunds of PICA, and Chris Velasco of Artspace who, The Columbian reported, shared study “showing that 150 artists working in various media within this region would move into the [Vancouver Barracks] tomorrow if they were turned into studios. In addition, he said he has interest from 20 arts organizations within a 100-mile radius that also would like to relocate here.”

Southwest Washington Center for the Arts (SWCA) founded with a mission “to facilitate the building of a world class center for the arts to enhance the educational, economic, and cultural vitality for SW Washington, to be centrally located in the city of Vancouver.”

SWCA produces feasibility for a performing arts center on the site of the Vancouver Police Headquarters in the Vancouver National Historic Reserve.

Art at the Cave gallery opens

KO Projects with Opsis Architecture produces feasibility study for a performing arts center possibly co-located with an arts-focused elementary school and maker space on the site of the Fort Vancouver Regional Library’s headquarters.